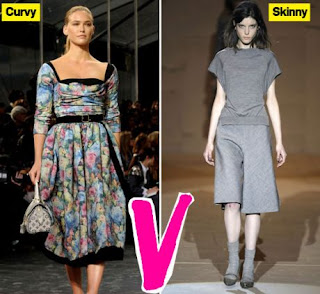 A new study from The London School of Economics and Political Science claims that plus-size models will increase obesity in the United States and Europe. Authors, Dr. Davide Dagone and Dr. Laura Savorelli, write that, “Given that people are on average overweight, we conclude (that using larger models) may foster the obesity epidemic.”
In a weird way, I understand where their logic came from. Yes, Obesity is a problem in the U.S. and if plus-size becomes the normal standard of beauty, anything over becomes more “ok” or attractive to society and people are less likely to try and control their weight. The study says things like, “Health is on average reduced since people depart even further from their healthy weight.” There are so many more things to take into consideration though. For one thing, they make the assumption that plus-size models are overweight and that’s not always the case. They also make the assumption that thin models help people control their weight by providing incentive, but don’t note that they may also lead to eating disorders. The founder of Hope.com says, “I would say the skinnier models provide a worse body image and unrealistic standard. Younger girls are especially subjectable to being influenced by underweight models.”
If we’re going to go in their logic direction, it could also be argued that thin models lead to obesity because the models are so far from attainable that society just “gives up” instead of using them as a weight control incentives. Both are extreme and unlikely argument results. Dr. Gregg Jantz, an eating disorder specialist says, “We need a mix of models, none of whom have extreme weights, either thin or fat, but who look great at a “normal” weight.” Sounds about right.
In my opinion, if we don’t at least try and change the standard of beauty, whether normal or plus-size, then the way women view themselves will never change. It leads to a trickle down effect of women being unhappy with themselves, which leads to a lack of life confidence, which can and does hold women back professionally and emotionally. Why would we want to keep doing that?
Either way, any researcher or statistics course taker will tell you that one study does not a fact make.

..and just because I love this picture:
Here's Crystal Renn walking Gaultier in 2005 in full plus-size model glory. 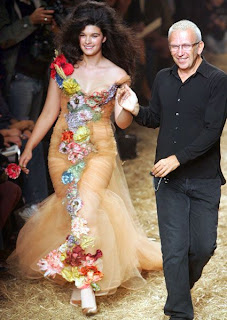 [photo/source: Hollywood Life]
Tagged in: plus size , obesity , eating disorder
The opinions expressed on the BUST blog are those of the authors and do not necessarily reflect the position of BUST Magazine or its staff.

Posted by CURVILICIOUS FASHIONISTA at 2:26 PM